How is PURPLE organised?

PURPLE is a participative network and is a legal entity - an international not-for-profit association under Belgian law (an AISBL). An Executive Board currently consisting of five political representatives chosen from the member regions, and a General Assembly consisting of political representatives from each member region manage the network. The General Assembly meets twice a year, once in Brussels and once in one of the member regions.  These meetings usually coincide with a PURPLE conference or event on peri-urban issues.

In addition, officers and experts from member regions meet regularly in Brussels as a Working Group to plan joint actions and events and to share experience.  A Lobby Group consisting of Brussels-based officers in the representations of member regions coordinates PURPLE's Brussels contacts and actions and monitors EU policy development. 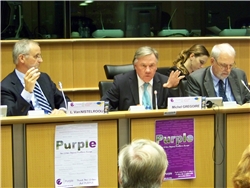