On 12 October, three PURPLE Regions (Surrey, South Moravia and FrankfurtRheinMain) and two non-PURPLE provinces (Val-d’Oise in France and Osijek-Baranja in Croatia) co-organised a seminar entitled “Sustained and sustainable growth strategies around major urban centres - State of play and regional visions for the future”.

The event, which took place at the Press Club in Brussels, was part of the official programme of the European Week of Regions and Cities 2016 - Open Days as was. The seminar drew an audience in excess of seventy from nineteen countries. Speakers included MEP Ivan JAKOVČIĆ (REGI Committee), EESC Member Roman HAKEN, (Rapporteur on the EU Urban Agenda), together with Mrs Katarina NEVEDALOVA who joined us as a representative of the Slovakian EU Presidency and who shared a platform with expert practitioners from South Moravia and Mazovia.

PURPLE president Helyn CLACK both opened and closed proceedings and reminded the audience that "... growth strategies around major urban centres can only be successful if EU strategies and investments - including those made within cohesion policy - maintain a strong territorial focus with more specific attention being paid to peri-urban areas".  This viewpoint very much chimed with the opinions of other speakers all of whom placed emphasis on the differences as well as the similarities in the challenges being faced by territories of varying kinds.

Mrs CLACK made clear that recognition and understanding of the territorial dimension is a key pre-condition of achieving sustainable growth and that in the context of the event’s agenda that meant understanding the unique characteristics of areas surrounding major urban centres. “Without exception we will find a whole complex web of relationships and interdependencies between these areas and the urban centres themselves”, she added. This was very much borne out in the interventions regarding the areas around both Brno and Warsaw that made clear the need to harness genuine partnership working between different actors using all available programme and policy instruments.

In the course of his keynote speech Mr JAKOVČIĆ argued that although Peri-urban areas across Europe in some regards face the same challenges, there is no one-size-fits-all solution toolkit to be applied because of the specificity of local circumstances and the different synergies that exist with the regional and national levels. For example, in some local contexts such as that in Istria, where economic sectors such as culture and tourism are well developed and managed, there may be a stronger rationale for people to remain living outside the major urban centres than is the case elsewhere. As an interesting aside Mr JAKOVČIĆ also pointed out that the type of economic drivers in place locally would also serve to determine from where else in Europe one might want to learn best practice lessons.

Growth without a strategy is hugely dangerous Mr JAKOVČIĆ pointed out and the point was echoed by Mr HAKEN who expressed the feeling that developing strategy can be very challenging where meanings and definitions are not necessarily clear. For example, the concept of “urban space” is not well defined yet and in some Member States an urban area is identified by the number of people living there and in others (as for example in the UK) they are defined in terms of functionality levels: health, education, etc. Notwithstanding such issues, there are clear links between urban and rural areas (definitions notwithstanding!) and we should be sure to look at tools such as LEADER and CLLD as a means of making these increasingly effective. For Mrs NEVEDALOVA, as well as for other speakers, a key element in making successful use of LEADER, CLLD and indeed of Integrated Territorial Initiatives (ITIs) as well as of Cohesion Policy funding more generally,  was to make real the much talked about “simplification” processes that are very often referred to but seem only rarely to be implemented in reality.

This last point was returned to by Mrs CLACK in her concluding remarks when she agreed that sheer complexity and bureaucratic burden remained a serious obstacle in achieving local impact as borne out by her own experiences as a member of an ESIF management committee in the United Kingdom. Such challenges doubtless remain to be overcome Mrs CLACK concluded, but we need to remain positive and focused in order that we can build on our many successes, in which last regard she gave her thanks on behalf of PURPLE to all our speakers and to the audience. 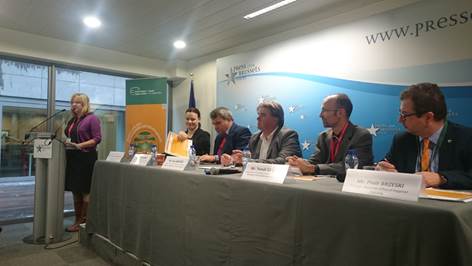 homeWelcome
This is the site’s lobby. It shows recently published articles and news keeping you up-to-date on all things PURPLE.about usGet to know us
Learn about our mission, structure & members.newsThe latest on PURPLE
Current and archived news articles.eventsPURPLE meetings & events
publicationsPublications
A variety of documents and films available for on- or offline viewing.ROBUSTFurther details of the ROBUST project will appear shortly in this section of the website
linksLinks
Visit websites of organisations and projects affiliated to PURPLE.contact usContact us
Contact information for PURPLE.sitemapSitemap
Shows a list of all the public pages on the PURPLE website.