Members past and present:
Dublin

The main functions of the Authority are:

The Dublin Region comprises the administrative areas of Dublin City Council, Fingal County Council, Dun Laoghaire-Rathdown County Council and South Dublin County Council. The population of the region is approximately 1.19 million and represents over 30% of the total national population.
The Region is situated to the east of Ireland and occupies an area of 92,200 hectares. The Region is partly located on the coast with mountain ranges to the south and rich pastures to the west and north. There are approximately 30,000 hectares of agricultural land within the Dublin region at present though development pressures mean that these lands are under continual threat.
The DRA seeks to work in conjunction with PURPLE to maintain the diversity, heritage and quality of life of its own peripheral urban areas. This will be achieved through information share of best practices, the development of partnerships for EU projects and the incorporation of peri-urban specific policies into regional and local level plans and programmes. 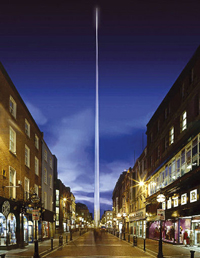 The latest Rural Development Programme 2007-2013 states that “to complete the picture of rural Ireland another category must be recognised viz. Peri-urban areas.” The DRA wishes to build on this recognition of the peri-urban region to help improve and develop: sustainable forms of rural and peri-urban living; interaction and connectivity between urban and rural areas using the peri-urban as a medium of information exchange and sustainable growth between the two; biodiversity and remediate ecological damage. The Region also hopes to promote diversification of farming activity so that proximity to urban markets can be better exploited. Farmers also face the challenge of successfully adopting new functions with regard to cultural heritage and landscape management.

Dublin city needs to extends its arms into the countryside in terms of improved infrastructural and communication connectivity. The peri-urban area can provide a circular hub around the city boundaries where there is a transformation from urban to rural fabric which complements both areas but which focuses strongly on the value of rural enterprise and eco-tourism. This holistic approach which takes account of the totality of sites, structures, and routes of human activity organized across a territory shaped by environmental, social, and economic processes can play an important part in creating a sustainable and complementary city and hinterland. An appreciation of the fundamental character of interactions between society and the environment, and interactions between urban and rural, forms part of the process of creating a new dimension to sustainability and creative thinking.