Members past and present:
Frankfurt/Rhein-Main

Frankfurt/Rhein-Main is one of Germany’s official metropolitan regions and one of the most dynamic and prosperous regions in Europe. It is a polycentric region with the City of Frankfurt at its core and 74 other towns and cities contributing to the region’s performance.

The Regionalverband FrankfurtRheinMain is Frankfurt Region's regional authority. The Regionalverband coordinates the interests of its 75 member communities for major issues, balancing these with regional planning concerns. Its main tasks are the creation of a Regional Land Use Plan and a Landscape Plan.

Although our region will mainly be associated with the banking (including the European Central Bank) and finance industries as well as its international airport hub, there are other fields of excellence, e.g. high tech chemicals and material sciences companies, as well as automotive companies.

Many of the towns and cities in the peri-urban part of this region are the location of these services and industries. Although their names may be less known, or known by insiders only, these are centres and not suburbs – think of Eschborn, the legal seat of Frankfurt’s stock exchange, Rüsselsheim, where Opel cars are manufactured, or the elegant Bad Homburg, to name but a few.

An important asset of our region is its open space: different from other European metropolitan areas, open space is also present at the region’s core, forming a network of green infrastructure throughout the region. In Germany, farmland and forests are publicly accessible as long as you stay on the paths. This makes open space an important resource for recreation and leisure.

Open space is protected legally here, but we feel this is not enough. We pro-actively promote and develop open space, for the benefit of our citizens, for example through the ambitious Regionalpark Rhein-Main and the associated GrünGürtel (the Green Belt) in Frankfurt. In recent years we profited from transnational co-operation in this field, and we want to continue this exchange about peri-urban topics for the mutual benefit of our regions and their citizens. 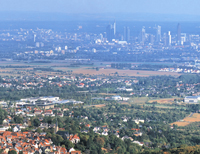 Farming is of a certain importance because it dominates land use in the open space. There is, however, an untapped potential of providing short distance food supply or rural services aimed at urban needs. Good examples of local produce are asparagus, fruit and, just outside the regions’ core, wine. A Frankfurt special is the “Green Sauce”, made of 7 herbs traditionally grown on an inner city location.

Somewhat confusingly, there are various definitions of our region (see map). The Regionalverband’s territory is legally defined and forms the region’s core ("Ballungsraum Frankfurt/Rhein-Main"). Unfortunately, it cannot be described statistically in NUTS III terms as 3 NUTS III entities are included in parts only – you’d have to go to LAU II level. EU reports often refer to the larger Regierungsbezirk Darmstadt (NUTS II DE71), not to be confused with the city of that name (and therefore preferably called “Südhessen”). The “Metropolregion” as agreed nationally is much larger and aimed at representing the functional urban region.

See also: Why Frankfurt-Rhein/Main is peri-urban - the legal argument and
the NUTS argument.

About one third of our region's population is living in Frankfurt. About half of the jobs are in Frankfurt, which in turn means that the other half is in the peri-urban area. Eschborn, a municipality adjacent to Frankfurt, has more jobs than inhabitants.

Frankfurt’s skyscrapers are quite spectacular, but this is only one aspect of the region.

There is a fabric of larger of smaller towns and cities, with settlements retaining qn almost rural character.

There is open space of surprisingly high quality, with wide views, forests and well equipped and signposted routes for strolling, walking or cycling. But the heavy infrastructure is never far away.