Members past and present:
MHAL (Dutch part only)

The MHAL-region is situated in the heart of the Euregio Maas-Rijn, at the foothills of the Ardennes-Eifel mountains. It cuts across the borders of The Netherlands, Belgium, and Germany, and encompasses the major cities of Maastricht, Hasselt/Genk, Heerlen, Aachen and Liège. It has a total population of around two million inhabitants, out of whom 1,2 million live in these five cities. The countryside is also fairly densely populated, with a number of average sized towns and larger villages.

The MHAL-region has a polycentric (circular) structure, where all cities have their own characteristics. The region profiles itself as a ‘Trinational Knowledge Centre” with a dozen academic and technical research and education institutions.

The common backyard for these cities is formed by the Tri-Country Park, the rural open space in the centre of the city ring. This open space, although often reduced, is an important agricultural, natural and tourist asset and the forms the basis for the regional identity.

Partners in the MHAL-region are public authorities who have collaborated since the 1980s in the Euregio Meuse-Rhine. They are: Province of Limburg (NL), the Flemish and the Walloon Regional Governments (B), the Provinces of Liège and Limburg (B), The German speaking Community (B), Stadt (City) and Kreis (District) of Aachen (D), and the Bezirksregierung (Regional Government) of Cologne (D). 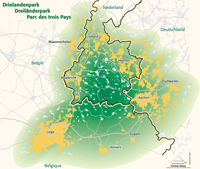 Each partner has its own planning structure and documents, subject to national and regional rules and legislation. The Development Perspective of the MHAL region (1993) and the Three Countries Park (formulated in 2003) are based upon common interests in the preservation of the economic, natural and cultural assets of the region. Partners will try to defend and apply these interests in their own policy environment and develop joint cross-border projects to implement these policy guidelines.

Agricultural projects in the MHAL-region focus on innovative combinations of cropping and landscape management. Examples are: restoration and preservation of typical landscape elements (farm buildings, monuments, fruit tree orchards), the rehabilitation of nature parks and ecological zones, and the exchange of information on landscape and environment between various interest groups in the city and the countryside. Nature and landscape maintenance can be carried out both by public or non-governmental organizations and by individual farmers or farmers' groups against fixed government subsidies.