New PURPLE President and Executive Board Members:
Mr Bert Gijsberts, Executive Councillor for the Province of Flevoland and member of the Committee of the Regions
Mme Michèle Vitrac-Pouzoulet Regional Councillor, Île-de-France

Mr Arnoud Rodenbourg, Burgemeester, Gemeente Midden-Delfland and Deputy President of Cittaslow met PURPLE President Helyn Clack on 4 November 2014 and signed the PURPLE Charter on behalf of his network. They agreed that Cittaslow and PURPLE share a number of areas of interest, including:

They will look in the future for practical ways to link the work of the two networks. 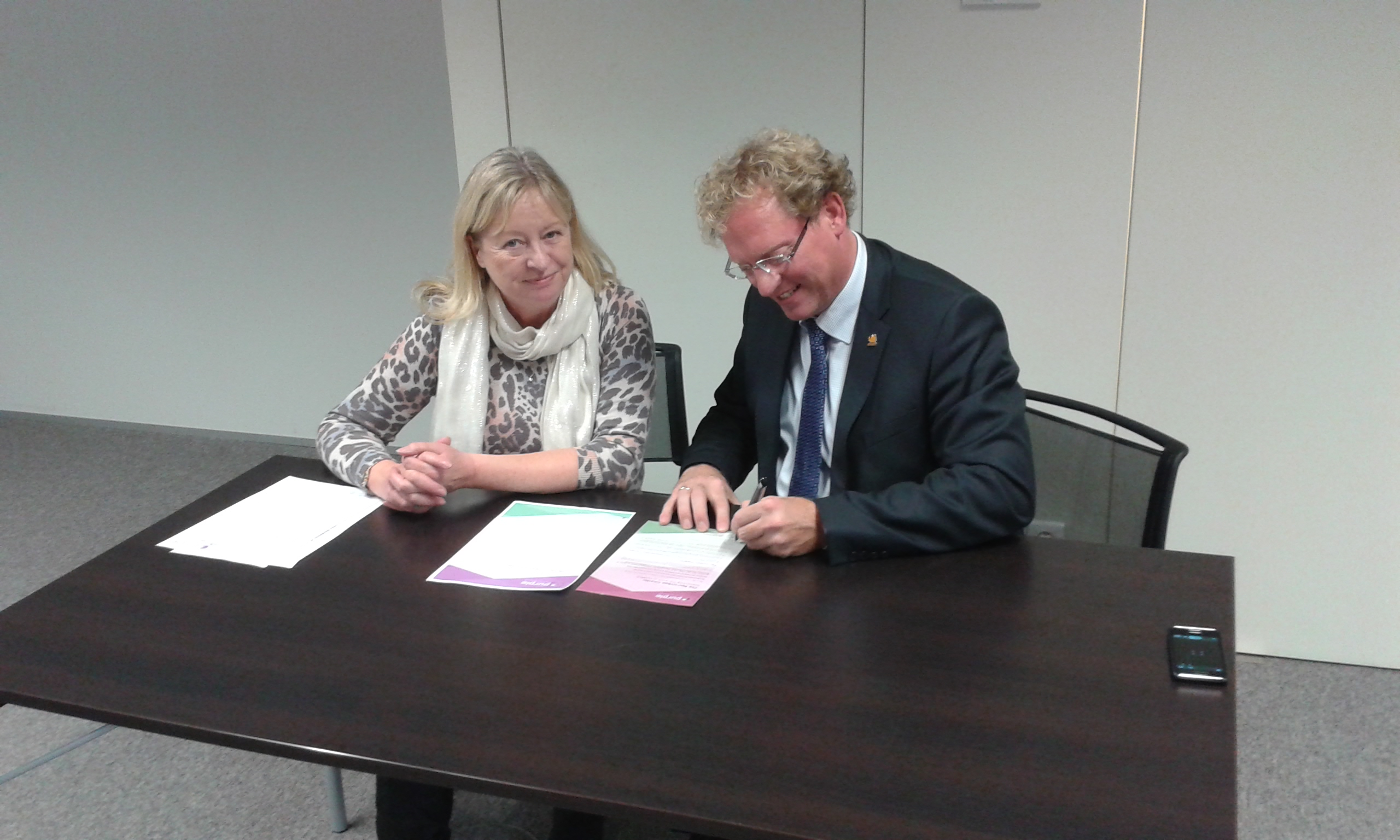 CLLD as a tool of Cohesion Policy 2014-2020 for local rural, urban and peri-urban development

This public hearing will inform an opinion of the Euriopean Social and Economic Committee on Community led Local Developmant (CCLD) as a tool of Cohesion Policy 2014-2020 for local rural, urban and peri-urban development and will takes place on 29 September, 2014 in Brussels (registration opens on 20 August).

PURPLE's General Assembly meetings in Valence on 12 and 13 June, 2014 began with a conference on 12 June. This was an opportunity for an exchange of views between elected representatives, local stakeholders and some of PURPLE's regional representatives on the topic 'Making room for both high quality agriculture and urbanisation'.

The spatial, economic, and environmental challenges facing this dynamic part of the Rhone valley were explored and compared with those in  other peri-urban regions of the EU.

More about the event including speakers and presentations

PURPLE meetings in Rhône-Alpes 12 and13 June

Conference: Making room for both high-quality agriculture and urbanisation

PURPLE holds its 20th General Assembly meeting in Valence, Rhône-Alpes on 12 and 13 June, 2014 and the Association of Mayors and Presidents of Federation of Municipalities of the Drôme Department have organised a conference to coincide with these meetings from 0930 on the morning of 12 June in the salon 'Maurice Pic', Hôtel du Département, Avenue Président Herriot - 26000 Valence

Making room for both high-quality agriculture and urbanisation

The reality of European rural areas: an overriding issue for EU competitiveness

In the run up to the European elections, regions and international organisations call on the future Parliament and Commission to further take into account the new reality of rural areas.

The European Union (EU) is facing several key challenges and responding to these will prove to be a particularly complex and expensive process. Focus is drawn today towards increasing effectiveness by using factors such as competitiveness, urban areas and innovation. Other targets, primarily rural areas, are being left out when in reality they are brimming with potential.

Gathering 70 participants, the RUR@CT Benchmarking Seminar allowed the Assembly of European Regions (AER) and the European Countryside Movement (ECM)* to join forces in order to convince European stakeholders and the EU of the importance of restoring rurality to its rightful place, as one of the priorities.

"Encompassing 59% of Europe's population and 56% of EU's employment, the role that rural and peri-urban areas play within the completion of the Europe 2020 Strategy is undeniable. These areas produce wealth and added value, yet their full potential remains unexploited. The vitality and the consideration of these territories as poles of development and innovation is key to a sustainable growth and a well balanced territorial development”, underlined Gerard PELTRE, ECM President. “This is why it is crucial that MEPs’ of the new Parliament take up this issue through a White Paper on territorial realities in the European Union and the establishment of an intergroup devoted to the development of the rural territories, including peri-urban areas”, he stated.

In order for the objectives of economic, social and territorial cohesion to be met, the European policy approach cannot solely focus on a system of metropoles. Not denying the importance of metropolitan areas, the unique spatial quality of Europe must be the connection between urban and rural areas. “As highlighted in the AER ‘Denanot Report on Rurality’, Rural and peri-urban areas have a particular role in this relationship, given their importance in terms of local agriculture, landscape quality, environmental management, employment and social cohesion. These areas are much more than just agricultural or recreation zones." said Doede SIJTSMA from the Province of Gelderland (NL).

Rural Europe of today has evolved and its economy is diversified. Agriculture remains a vital economic and territorial activity, but the secondary and tertiary sectors take up a major role in terms of employment. The RUR@CT Benchmarking Seminar gave the floor to several regions, such as Wallonia (BE), Alba (RO) or Noord-Brabant (NL) to put forward concrete examples of this diversification. Noord-Brabant for example, is currently engaged in strengthening Quadruple Helix partnerships to enhance innovation in its regional countryside.  A wide range of success stories on innovative ways of unlocking the potential of rural areas highlighted the importance of interregional cooperation as a tool to build greater economic diversification in rural territories.