On behalf of the partner regions involved in the 2015 Open Days seminar “Urban Agenda & ESIF 2014-2020:  Involving peri-urban territories in order to boost urban-rural links” held in Brussels on the 14th October, the Randstad Region has now published and distributed a set of "KEY MESSAGES” arising from the event.

This hugely successful event, supported by PURPLE, drew an audience of over one hundred delegates from more than ten countries and from all sectors.

Although PURPLE and its members continue to have deep reservations about the use of terminology such as “urban-rural links” and the refusal on the part of some EU decision-makers to move beyond the old rural–urban duality, the event proved a hugely successful opportunity:
-    to showcase “on the ground” experiences of urban-rural integration measures in the Netherlands, Germany and the UK
-    to make the peri-urban case and to receive endorsement from several speakers - including two MEPs, as well as representatives of both the European Commission and the forthcoming Dutch EU presidency

As stated by PURPLE president Helyn Clack in her introduction to the event, Urban Policy is not just policy for cities and Europe cannot be simply broken into territories of different types and labelled, “urban”, “rural”, “remote” or anything else. “Any urban agenda should indeed include a consideration of urban impacts on surrounding territories and vice versa”, she insisted.

Pierre KANUTY, President of Ile-de-France Europe, concluded the event by expressing the frustration of seeing the key role of peri-urban areas acknowledged by many of the event’s speakers, but not translated into concrete reality within funding programmes etc.

The Executive Board of PURPLE has for a long time deliberated the merits of attaining some kind of formal legal status for the network. That work and effort has now come to fruition with the publication of a Belgian royal decree conferring approval of its aplication to operate as an AISBL. The intention is that such a development will enable PURPLE to become directly involved in EU projects and othe initiatives in its own right with the profile rasing benefits which that infers. 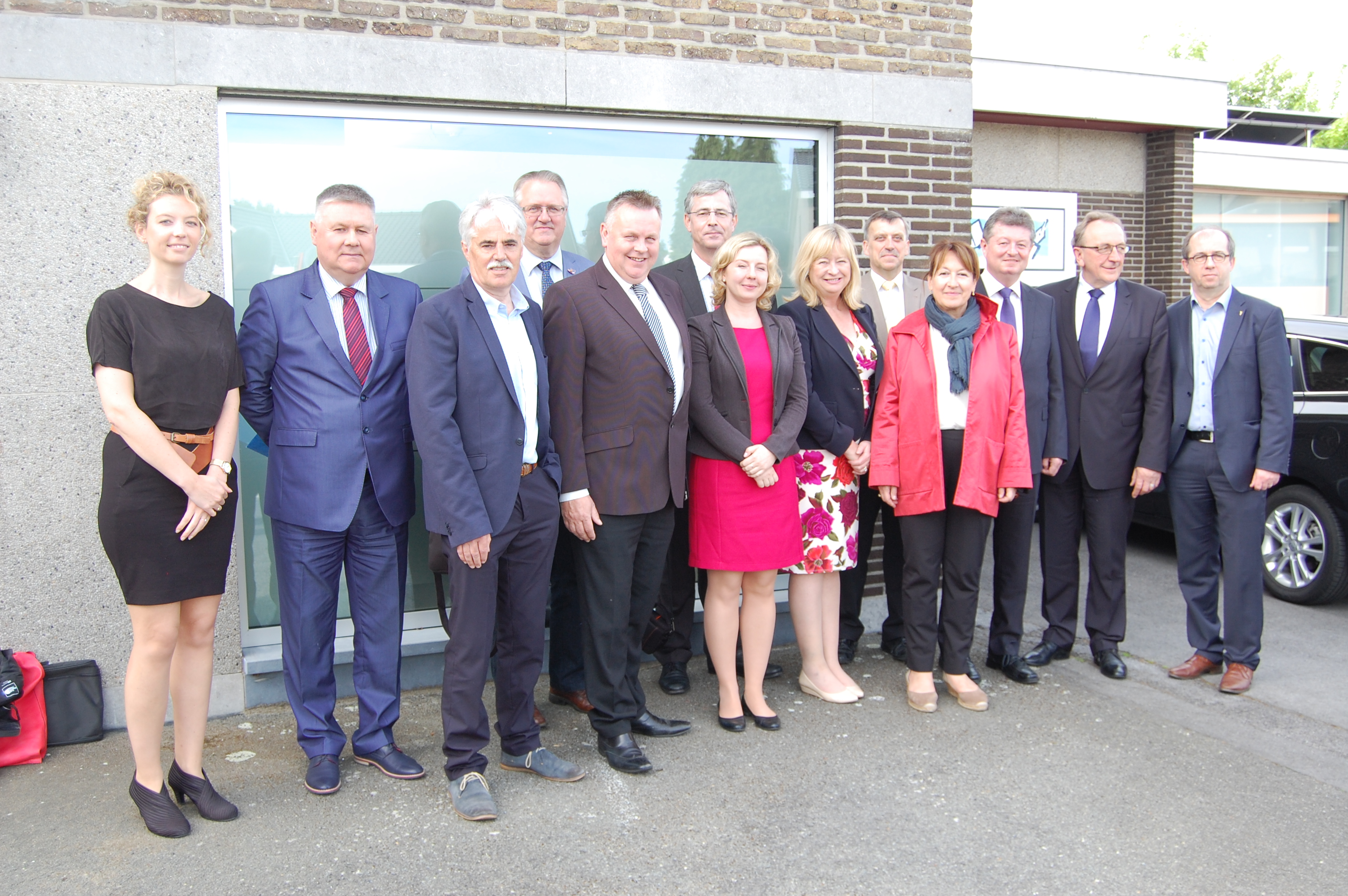 PURPLE and friends at Open Days 2015

PURPLE partner regions and others recently mobilised themselves to promote and defend the interests of peri-urban areas as part of the 13th Week of Regions and Cities (OPEN DAYS).

Under the leadership of Ile-de-France, a project consortium comprising Brandenburg and Frankfurt RheinMain (Germany), Randstad (the Netherlands), Nord-Pas-de-Calais (France), Surrey (England) and Bjelovar-Bilogora (Croatia) combined to deliver a public seminar entitled The Urban Agenda & ESIF 2014-2020:  Involving peri-urban territories in order to boost urban-rural links generously and expertly hosted by the Randstad region in the House of the Dutch Provinces.

Speakers included two Members of the European Parliament, together with representatives of both the European Commission and the forthcoming Dutch EU presidency – PURPLE and the individual consortium members are extremely grateful to them as well as to those who came and spoke about “on the ground” experiences of urban-rural integration measures in the Netherlands, Germany and the UK.

Although PURPLE and its members continue to have deep reservations about the use of terminology such as “urban-rural links” and the refusal on the part of some to move beyond the old rural – urban duality, the event proved a hugely successful opportunity to make the peri-urban case and to receive endorsement of that case from many of our speakers and contributors from the floor.

The event itself was over-subscribed and drew an audience of over one hundred delegates from more than ten countries and from all sectors:  when considered that any one OPEN DAYS event is part of a large programme of overlapping workshops and seminars held across Brussels and beyond, that in itself is a significant achievement.

Delegates heard PURPLE president Helyn Clack remind those present that Urban Policy is not just policy for cities and that In PURPLE we know and understand that Europe cannot be simply broken into territories of different types and labelled, “urban”, “rural”, “remote” or anything else. Mrs Clack went on to point out that “Any urban agenda should include a consideration of urban impacts on surrounding/nearby territories and vice versa”, she concluded by suggesting that peri-urban regions such as those represented in PURPLE have a huge amount to offer those involved in urban policy development in terms of lessons learned, experience, successes, and ongoing best practice development, and that PURPLE wants to see that used for everyone’s benefit.

Pierre KANUTY, President of Ile-de-France Europe, concluded the event by reminding those present of the challenges ahead. How is the territorial focus to be safeguarded in future cohesion policy and how is specific attention to be paid to the critical contribution of peri-urban areas such as those represented in PURPLE? M. Kanuty expressed the continued frustration of seeing the acknowledgment of the key role of peri-urban areas acknowledged in many policy pronouncements and by many of the event’s speakers, not translated into concrete reality within funding programmes and similar, but concluded nevertheless that progress has been made and there is cause for optimism if our hard work continues to win support.

The GIFT-T project on Green Onfrastructure for Tomorrow Together will hold its final event - Landscaping Your Future - on 8 May at the Van der Valk hotel, Brussels airport.

A Peri-Urban dimension to an EU Urban Agenda

A Peri-Urban dimension to the EU Urban Agenda

The response of PURPLE members to the European Commission's recent consultation' The urban dimension of EU policies – key features of an EU Urban Agenda' argues for recognition that peri-urban regions are a growing and dynamic feature of EU territorial development and must be taken into account in any future urban policy agenda.

An urban policy agenda mainly directed towards cities risks ignoring the functional interdependence across wider peri-urban territories that is essential for cities to prosper. This is a particular risk in complex polycentric territories and those with a longstanding peri-urban territorial development where there is a strong urban dimension across much wider areas around and between cities.

An urban policy agenda with a broader and more inclusive focus will also allow a realistic appraisal of lifestyle choices and working patterns now available to citizens. For a growing number of people, new technologies, greater mobility opportunities and more flexible working patterns mean that the city may be only one element of an ‘urban’ existence.

Large peri-urban areas of the EU provide the means for cities to function and for city dwellers to enjoy a better quality of life.  As a result, they are often under great pressure to deliver multiple and often conflicting or competing services. Because these peri-urban areas are the location for resources and infrastructure essential for the functioning of cities and towns, there has to be joined up thinking over wider functional territories in a number of policy areas, including transport infrastructure and mobility management, housing, water, energy, waste and food.

In addition, the spatial and environmental resources of peri-urban areas are important for quality of life and the well-being of inhabitants of cities and towns providing essential elements which make up regional identity – landscapes, biodiversity, regional products, cultural heritage – and allowing access to open space for recreation and health.

All this means there are pressures (particularly environmental) which have to be acknowledged and managed to ensure balanced and sustainable development of peri-urban areas.

Why not join PURPLE in the development of ideas for a more territorially appropriate urban policy agenda?

PURPLE has been accepted as a member of the newly formed EU Rural Networks Assembly as a representatve for regional and local authorities.

The purpose of this EU network is: