PURPLE Secretary General Vincent O’Connell today attended the 8th General Assembly of the European Network for Rural Development – one day after the legal texts setting out the next steps of CAP Reform were published in the Official Journal (OJEU).

DG AGRI Director-General, Wolfgang Burtscher, gave what was essentially a review of 2021 looking back over a year which saw agreement and adoption of the new CAP, much work done on the establishment of CAP National Strategic Plans (NSPs), publication of the Long Term Vision for Rural Areas (LTVRA), and considerable work and progress on implementing the agriculture and rural development related elements of the Biodiversity Strategy 2030 (BDS) and Farm2Fork.

Burtscher allowed that for many, the latest CAP reforms place too much constraint upon farmers, whilst at the same time many others feel that it does not go far enough in meeting environmental and climate challenges. His own view is that we have arrived at a reasonable and balanced compromise, but one that is critically related to the success of NSPs going forward.

With all NSPs due to be submitted by the end of this year (and with confidence that all secondary legislation relating to the new CAP will be in place by then), and then finalised and approved by the end of 2022, this is a challenging process. With initial EC observations due by 01/04/22, there will then be a further nine months to address issues and agree everything, a process which is intended to involve a wide range of stakeholders and to be transparent, and will include assessments of complementarity and synergy with the content of National Recovery and Resilience Plans (NRRPs) and ESIF Operational Programmes.

PURPLE input to the CoR opinion on the LTVRA

PURPLE was delighted to see recently that a number of points it had made in a recent consultation exercise on the CoR Opinion on the Long Term Vision for Rural Areas, now appear in the version adopted at the committee stage.

PURPLE had responded in detail to the initial note provided by rapporteur Juan Manuel Moreno Bonilla, the President of Andalusia, with a paper consisting of a number of sections and sub-sections as well as an annex dedicated to the emerging findings of the H2020 ROBUST project with regards to rural-urban linkages and interdependencies. Those sub-sections included particular points with regard to rural proofing, the Rural Pact, rural and urban typologies and strengthening rural urban relations. Of course, it also contained background information about PURPLE and our understanding of the crucial role played by peri-urban actors and places.

The CoR Nat Committee (Committee for natural resources)  from within which the Opinion has evolved has now adopted a darft version of the Opinion which will next be submitted to CoR Pleanary at its late January meeting.

It was especially heartening to see mutiple references both to rural-urban linkages, and to the peri-urban itself, (absent entirely in the initial note), in the text agreed on November 23rd. We have taken the opportunity to reproduce below the articles/paragraphs which reflect, partly or wholly, points made in PURPLE's own paper. That paper is itself available in the member restricted area of the website or upon request to: info@purple-eu.org

3. stresses the need to ensure that mutually beneficial rural-urban linkages are integrated into all EU policies in line with territorial cohesion objectives by making the most of the strong interdependencies between rural and urban areas

4. recommends that the current region-city-based territorial model be changed to one based on a fair rural-urban balance, which includes compensation mechanisms to ensure, firstly, that the number and diversity of legal persons in rural areas is maintained (and increased if appropriate) and, secondly, to protect and increase biodiversity

30. stresses the importance of making the most of rural-urban interdependencies within a framework of territorial equity that takes into account that investments made in rural areas can directly or indirectly benefit urban areas

32. stresses that renewable energy production is an opportunity for rural areas to combat energy poverty and generate energy self-sufficiency in functional areas (including rural-urban areas in their sphere of influence), provided that eco-system services are properly valued and that business models retain their value within rural communities

34. notes the importance of improving transport connections with peri-urban and rural areas, primarily through regional authorities and their operational programmes, in order to guarantee coordinated, effective and efficient action

35. points out that particular attention should be paid to infrastructure and cooperation in rural border regions; emphasises the need to improve the public transport infrastructure and service system in rural areas, ensuring the development of sustainable mobility solutions that reduce travel times and of the number of connections between urban and peri-urban and rural areas

South Moravia and the Conference on the Future of Europe

PURPLE member region South Moravia are busy with the ongoing Conference on the Future of Europe (CoFoE). They plan a total of six citizen engagement workshops, the first of which took place late in October in Retz, Austria as a bilateral transnational exchange network event.

Speakers included Austrian EU Commissioner Johannes Hahn who was joined on the platform by Jiří Nantl, Deputy Governor of the South Moravia Region. The Mendel University of Brno, previously contributors to PURPLE General Assemblies in 2014 and 2018 were also represented in the three-hour event constituted as European Citizens' Dialogues around the theme of "My Wish for Europe's Future"

This is only the first step on the CoFoE journey for South Moravia colleagues, with five further workshops planned to take place in Brno itself on the themes of youth and the EU, culture and creative industries, agriculture, science and innovation, and the four fundamental freedoms of the EU - the ambitious plan being that all will have taken place by the end of January 2022. 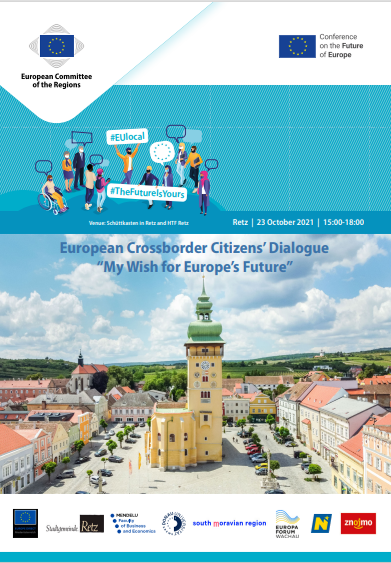 PURPLE has been working closely with colleagues from the Euregion Maas-Rhine for a number of years now in the context of peri-urban landscape governance etc., and is very pleased to share news of their impending twentieth anniversary. To mark the occasion, the Euregio forum are holding a one-day virtual forum on 24 November 2021 featuring inputs from all four partner regions, Flanders, Wallonia, North Rhine-Westphalia, and Dutch Limburg.

Taking the severe flooding experienced in the area in July as a reference point, the event will explore the ways in which long-term cooperation, effective practical measures and accompanying exemplary projects for a borderless and climate-resilient euregional landscape might be developed. In other words how best one might move to something more systemic and strategic than a more straightforward and immediate crisis response in a cross-border territory where water is a determining element: for the climate, for biodiversity, for providing a safe living space and for economic productivity.

The afternoon will feature a nunber of more practical level workshops on various dimensions of water management in different river basins/valleys and will also see the launch of the social media campaign "my landscape".

The event will be held in German, French and Dutch as befits the nature of the trans-border partnership with details, including a finalised programme, and further details in English as well as the three other languages at: Euregionales Forum 2021 : Dreiländerpark in der Euregio Maas-Rhein (drielandenpark.info)

Online registration in advance is required via the event organisers at:

PURPLE at the European Network for Rural Development

Chaired by DG AGRI, Commission officials gave an uodate on progress with the CAP Reform process during the period since trilogue sign-off back in June, and outlined areas of possible operational changes going forward, as well as outlining the currrent state of play and planned next steps for the Long Term Vision for rural Areas (Rural Vision). The latter focusing on plans for the launch of the Rural Pact and for future work on rural proofing and the establishment of a rural observatory.

There was also a presentation with the latest developmenst and plans for cluster 6 of the Horizon Europe programme and the recent eatablishment of a Soil Mission as part of the programme architecture.

Attendees were also able to hear details of future plans from the successful winners of a recent procurement exercise putting in place contracts to a) manage the ENRD Contact Point, b) manage ENRD communications and logistics and, c), to manage the next iteration of the EIP AGRI. The last of the three was successfully secured by a consortium led by PURPLE member, the Flemish Land Agency (VLM) with more detail porvided later in the meetng of their planned activities as well as details of the team responsible for delivery.

There was also a discussion around the future of the grouo itself once it is reconstituted to align with the requirments and provisions of the new CAP legislation post-transition, That cannot be affected under all secondary as well as primary legislation is in place and is likely to occur next year.

For further details, or in case of any queries, please contact: info@purple-eu.org

PURPLE Input to future CoR Opinion on the Rural Vision

PURPLE was pleased to be able to take advantage of the chance to submit a contribution to the planned Committee of the Regions own-initiative Opinion on the Long Term Vision for Rural Areas (LTVRA).

The eight-page response was submiited to the relevant CoR administrative team with the promise that it be forwarded to Juan Manuel MORENO BONILLA, President of the Region of Andalusia, in his capacity as rapporteur for the Opinion due to be adopted in December this year.

In a background paper prepared by the NAT Commission secretariat, CoR members and others were invited to respond to a series of 13 questions as well as to points that were raised in discussion at the Commision's virtual meeting on September 27th. Members of the PURPLE Lobby Group looked at this topic based upon a meeting note prepared by the Secretary General and the response was written accordingly.

As well as pointing out the role that PURPLE had itself played in the development of the LTVRA, the paper included an annex highlighting the work done by the H2020 ROBUST project and how its findings with reagrd to rural-urban linkages and synergies need to be integrated into the LTVRA future implementation plans. The paper also set out a number of more general points with direct application to peri-urban interests in the contexts of rural and urban typologies, on strengthening the links between "rural" and "urban" areas, on rural proofing, and on the Rural Pact.

The submitted document is available on the Lobby Group section of the PURPLE website and is also available to any interested party on request: info'purple-eu.org